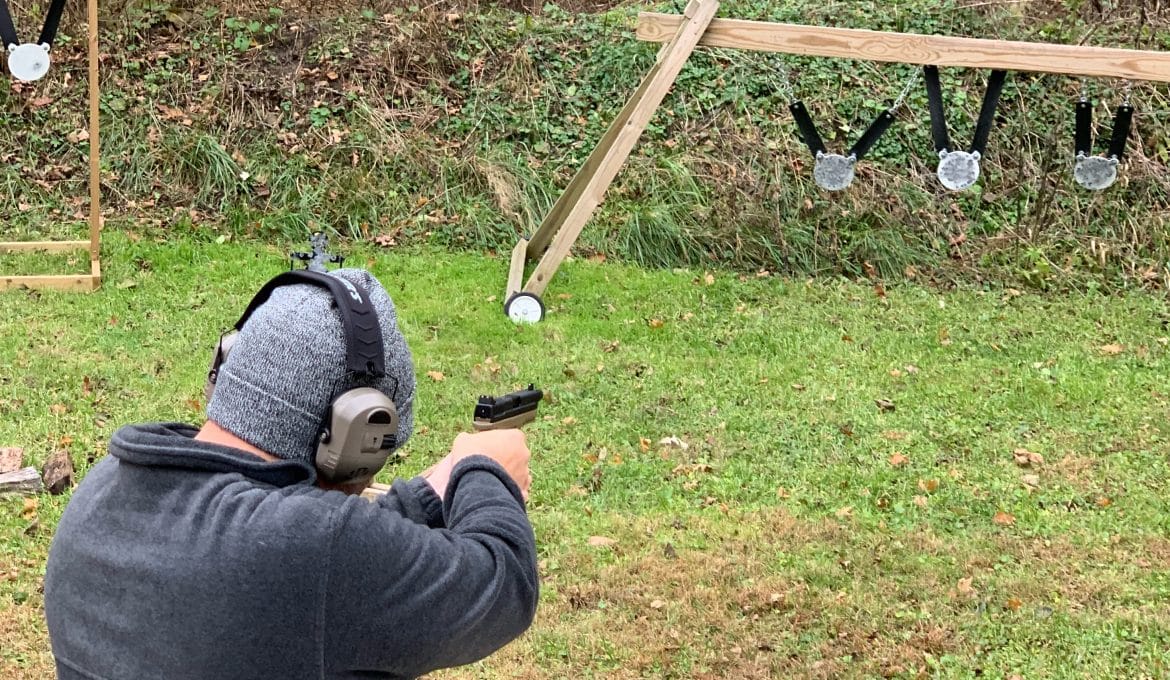 This can make shooting difficult, especially with handguns. Being cross-dominant can severely limit your shooting ability, cause you to miss shots, and can cause you to develop bad shooting habits.

That is, if you don’t know how to compensate for it.

I myself am cross-dominant, and I’ve found solutions not only for myself, but for other shooters I’ve worked with. Cross-dominance among shooters is easy to diagnose, and, with a little bit of work, easy to overcome. Let’s get to it.

If you find your shots landing high and to one side consistently, you could be cross-dominant.

If this is the case, or if you want to test for cross-dominance, make a triangle with your hands and hold them out in front of you. Pick an object across the room and focus on it through the gap in your hands.

Close one eye, then switch. With one eye, the object should stay centered in your impromptu viewfinder, and with the other, it should move off to the side an be obscured slightly. They eye that maintains a clear view of the object is your dominant eye.

Now, if you are cross-dominant, there are some things you can do to mitigate the effects it has on your shooting.

With a shotgun or a rifle, you have three real options.

First, you can simply close your dominant eye, or cover it with an eyepatch, or some tape on your shooting glasses. This eliminates the effect of your cross-dominance, at the cost of cutting your field of view in half. This can be an issue if you’re hunting, but is generally okay for most hunters, and is fine for competitors.

Second, you can use a red dot or holographic optic, which allows you to keep one eye on the target, and one eye on the dot. This works to a much lesser degree with a magnified optic however, so keep that in mind. This is good for bird hunters, and those who use a shotgun for home defense especially.

Finally, you can simply learn to shoot with your non-dominant hand. This is difficult with a pistol, but is probably a lot easier than you’d think with a rifle or shotgun. Give it a try and see what you think.

If you’re cross-dominant, pistol shooting is less of an issue than rifle shooting in many cases.

First and foremost, if you’re a newer shooter, you should just go ahead and learn to shoot with your non-dominant hand. This is much easier, and will serve you better in the long run.

If that’s not an option, you can do the eyepatch/scotch tape over your shooting glasses (chapstick also works, and leaves you at least a little vision) to block out enough of your sight to let your non-dominant eye take over. You can also simply close or squint your eye.

The best option though, is to adjust your shooting stance. You can do this in one of three ways.

First, you can tilt your head over to the side, which is what I did for a while. Simply tilt your head to bring your dominant eye inline with your sights. You’ll likely look a little silly, but you’ll hit your targets, and that’s what really matters.

Second, you can do what I do now and turn your head to the side, like you’re in the process of shaking your head “no”. Do this to bring your dominant eye in line with your sights, and you’re good to go.

Finally, you can move the gun, either by canting it to one side, or by bringing it over so its inline with your dominant eye, but neither of these solutions are really as effective as moving your head, but you can try them and decide for yourself which is better.

Cross-dominance can be an issue when you’re shooting, but it doesn’t have to be the end of the world. Following these steps will help you find a method to handle the problem that doesn’t compromise your ability to put rounds on target.