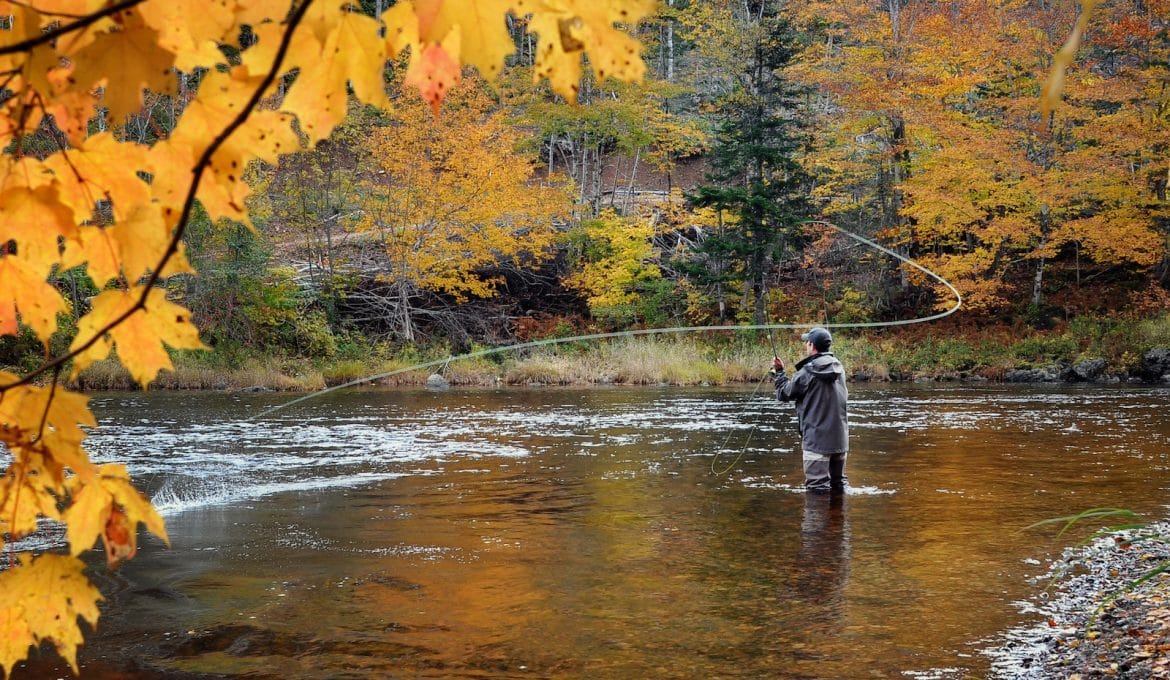 Fall can be some of the most enjoyable times to fly fish. The cool breeze, the sun on your face, and the quickly cooling water temperatures make reeling in a fish tons of fun. However, you’re not going to be reeling in many fish if you don’t adjust your strategy for the fall months.

Here are some tips to keep you busy catching fish with your fly rod this fall.

When fall comes, leaves and other debris can sit on top of the water. One of the ways you can catch the attention of fish is to add a little motion to your fly as you fish.

This will let the fish differentiate you fly (what they think is food) from the rest of the stuff on the top of the water. Practice varying degrees of movement to see what works best for you. Every body of water is different.

Fish aren’t stupid. They’re not the smartest things in the world, but they’re not downright dumb. That means as the water clears up in the fall as it often does, it can help to wear earth tones and make sure to at least somewhat blend in with your surroundings.

You don’t have to go full camo gear, but get some waders that are tan or brown (most are anyway) and wear earth tones with your shirt, jacket, and hat.

Go Out Later in the Morning

The cooling water temperatures in the fall mean a couple things. First off, it means you’ll need to dress appropriately. We discussed earth tones above, but you also need to dress warm and should think about going out later to catch the sun.

Beyond that, the fish aren’t immune to the colder temperatures. Many fish won’t become truly active until later in the day when the sun is up and the temperature is a little warmer. So, sleep in a little and have a good breakfast before going out.

Keep an Eye on Your Shadow

Fish can be easily spooked. While there are plenty of things that will make them swim for cover, one thing that you have direct control over is your shadow. In the fall, the days are shorter and the sun will typically throw your shadow over more water, depending on the time you’re out fishing.

Keep this in mind when you fish. You want to choose an approach to the stream or river you’re fishing that won’t let your shadow scare off everything you’re trying to catch. If you notice your shadow is right where you want to cast, then consider repositioning.

Use Bright Colors and Streamers

Talk to any fly fisherman worth a dang and you’ll learn that many fish become more territorial and aggressive in the fall. If you’re having trouble catching fish, use some streamers. The movement that comes with a streamer fly will get the fish, especially trout to strike.

Also, think about brighter colors. Bright colors will help you here, too, and are more likely to provoke a strike.

Have any additions? Leave a comment below. And, if you need any fly fishing gear, we have everything at Gander.