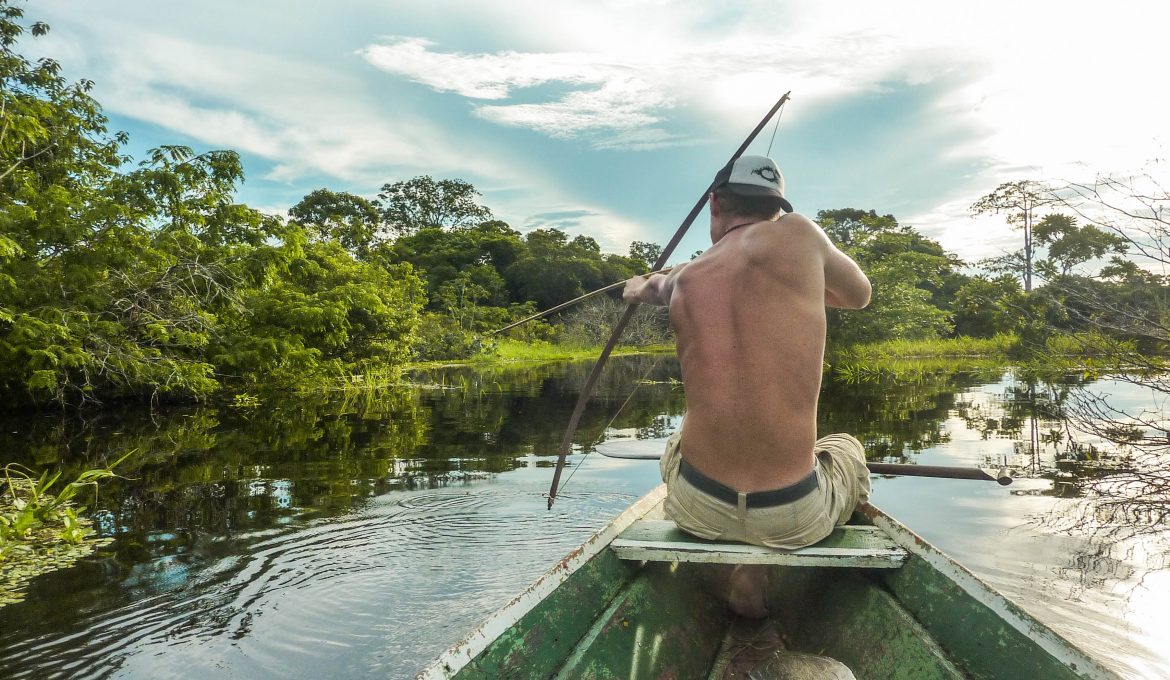 To start bowfishing, you’ll need the most obvious beginner tools: a bow and arrow with a fishing point. Of course, you’re not just shooting arrows all willy-nilly into the water. Although fun, it’s not productive. You’ll also need a drum reel to pull your arrow (and ideally your catch) back to you.

Your bow doesn’t need to be fancy. In fact, unless you’re a seasoned archer, it probably shouldn’t be fancy at all. Get comfortable with an entry-level product, then upgrade later once you’ve mastered a few of the basics. You want a draw weight from 25-50 lbs. to really whip the arrow.

The line in the drum reel (or plastic bottle in some cases) is heavier than you would fish with when using a traditional rod and reel. We’re talking braided line, between 80- and 400-lbs. test. You’re bringing in big fish here, and with an arrow through them, they’re going to be doing some flopping… or a lot of flopping.

Polarized sunglasses – You’ll be fishing in water that will often have a glare. To get the best shot, and the best catch, you’ll want polarized shades.

Waders– Especially in shallow water, it’s nice to get as deep and as close as possible for a closer shot.

Paddleboard or kayak – If you’ve got enough balance to stand and fire an arrow, then haul a large fish back to you (I don’t and can’t but I’m working on it – never give up), then a kayak or paddleboard can help you get much closer to fish in deeper water. Plus, it makes hauling your catch back to land easier.

Lights – Fishing mid-day in the heat of the summer is great, but night fishing with a bow can be rewarding as well. You’ll want a series of lights to help you see the fish, including a headlamp and a spotlight (for your spotter friend).

Bug spray– Because turns out, mosquitoes and a million other bugs are attracted to lights. Don’t let them deter you though! Bug spray will keep them at bay.

Bad news, bass fishermen: you can’t shoot just any old fish with an arrow. Sorry. Many game fish (those highly fished for both trophies and eating) aren’t legal. Instead, bowfishing targets are often rough fish. These guys tend to be invasive species and grow to be big—which makes for a nicer target anyway.

So what can you shoot? Here’s a quick list of freshwater varieties that are popular among bowfishing anglers.

This list isn’t exhaustive, by any means, and each state has its own rules (for example, some states require taking catfish with a hook and line). Check regulations before you start shooting fish to be on the safe side.

One quick note—if you’re like me, you sometimes like to eat the fish you catch. Carp aren’t known for being particularly appetizing, especially in North America, but they’re quite the delicacy in Asian and some European countries. Both buffalo and gar are quite appetizing (but beware of gar roe—it’s extremely toxic). Otherwise, bon appétit!

When should you fish? The easy answer… morning, day, or night. You can fish at any time of the day. It tends to be fruitful when fishing in the heat of June and July since monster carp are typically spawning in the shallows during that time.

For the best shots, the fish really need to be near the surface. That

makes shallow creeks particularly nice for bowfishing. You can wade, or if you have a boat, kayak, or paddleboard, you can float as close to the fish as possible without spooking them. Of course, shooting from the bank or a dock can also yield great results.

Good bowfishing can be an engaging social experience. You don’t have to worry about being quiet. If you’re new to it, you can ask questions and not be concerned about spooking the fish.

Now, aiming. Water creates an optical allusion and can make your aim less than accurate. The refraction of the water makes the fish look as though it’s in a different location than it actually is. As a result, if you’re aiming right at the fish, you’re probably going to miss. The rule of thumb is to aim low. If you’re good at math, you can do some quick calculations in your head to account for distance, depth, and angle.

The best advice is to simply take a few practice shots. Find a leaf or something beneath the water and try to hit it. Adjust your shot until you do. Then it’s game on!