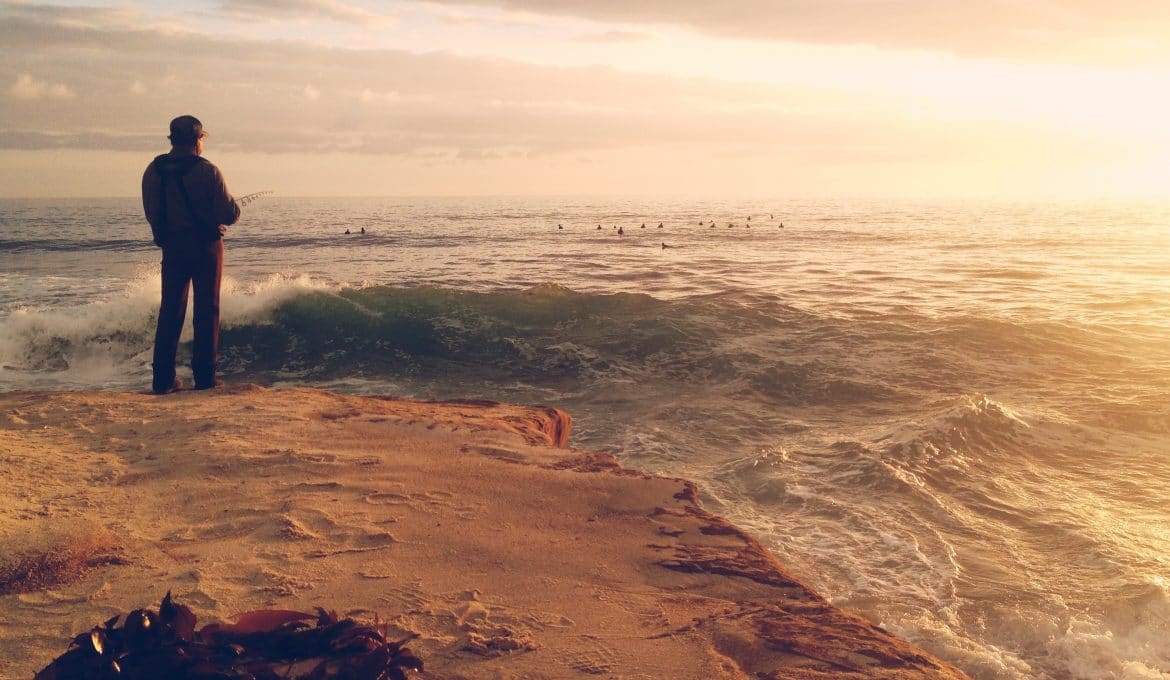 Lake Michigan is the second largest of the Great Lakes and the only one that is entirely in the United States. This lake spans 1,180 cubic miles and is only a bit smaller than the entire state of West Virginia.

The lake borders Wisconsin, Illinois, Indiana, and Michigan. Successful stocking programs have made sport and recreational fishing on this lake incredibly popular.

Where to Fish Lake Michigan

Every state has its spots that the locals call, “their spot.” If you’re traveling to Michigan or you live there but have never fished the lake before you might be wondering where you should go.

After all, it’s not a small pond that you could walk around and decide on a spot in a few minutes. If you don’t know where you’re going and whether or not you can fish there, you may waste a lot of your precious fishing time.

In this section, we’re reeling off a few of the best fishing towns on Lake Michigan and what you can catch while you’re there.

This city is located right at the tip of Michigan’s upper peninsula, and it almost kisses the lower peninsula. The town acts as a major gateway between the two, and it’s the only mainland city accessible from Mackinac Island by snowmobile when the lakes are frozen over.

To the locals, this area is known for some of the best salmon fishing in the North. If you head over to the northeast side towards Mackinac Island, you can expect some nice deep water fishing.

The Native Americans populate this area, so while you’re fishing this town, you need to watch out for gill nets from the local tribes.

This port city is on Little Bay de Noc in the upper peninsula. It’s named after the Escanaba River that flows through the town.

Here you can expect to catch brown trout, chinook, and walleye with walleye taking center stage in this town. Local experts say to take your fishing to the western part of Little Bay de Noc for a nice population of smallmouth bass in the weedy and rocky areas. They recommend using jigs and minnows along the drop-offs.

This town is considered the best place to find big chinook along Lake Michigan. There are frequent reports of chinook upwards of 20-30 pounds. For this fishing, the locals recommend taking a boat out a few miles into the midway water column and fishing for steelhead.

Manistique lies on the northern part of Lake Michigan where the Manistique River flows into the lake. This makes the town appear more like a harbor, so the local area attracts a lot of tourism for its abundant fishing opportunities.

This city is on the northwest section of the lower peninsula. The city is well known as the largest producer of tart cherries in the United States. Traverse City also features numerous freshwater beaches and easily accessible lakes.

The city houses a semi-protected bay called Old Mission Peninsula. That makes fishing a treat here because the bay is well stocked and not heavily fished. Here you can expect to find plenty of trout and chinook with the right jig.

This town is also on the northwest section of the lower peninsula right at the mouth of the Manistee River. The town boasts a large Native American population as well as some excellent and abundant fishing opportunities.

The town has a lot of piers that attract anglers looking to catch salmon and steelhead, and you can also take a boat out for chinook and trout during the summer. Locals recommend using live bait like shrimp in this area.

Ludington is on the western section of the lower peninsula, and the town attracts tourists all year long for its boating and fishing. The town has an abundance of inland lakes and state parks that draw anglers, hunters, and campers.

Most popular in the fall, this town brings in a lot of anglers looking to catch fall salmon. They line up along the shore and on the piers but in the winter is when fishing in this town really comes alive.

According to the locals, fishing for steelhead in the cold weather is incredibly popular and all winter long you’ll see rods in the sand and boat charters are busy in this area as well.

This small village only inhabits roughly 857 people, and it’s known as the “town of pent up waters.”

We can’t forget there’s another side to Lake Michigan and one of those neighboring states is Wisconsin. Milwaukee Harbor houses one of the largest brown trout populations on the lake, and the population is not only plentiful, but the size of the fish are incredible according to Milwaukee Mag.

These trout prefer colder weather, but you can still come and fish for them all year round.

What Can You Catch on Lake Michigan

Now that you have a good idea of where to fish Lake Michigan let’s talk a little more about what you can catch when you’re there.

Springtime is the best time for rainbow trout because they are spawning right now and you can find an abundance of these guys on Lake Michigan with no real rhyme or reason. Locals recommend walking out about ten feet and trying to cast outside of the break walls to catch them, but if you’re fishing the spring, you don’t have to stress the little details too much.

We’ve covered these guys a few times already and let it be known that Lake Michigan has some of the best trout fishing in the entire country. If you are looking to fish for size, you definitely want to check out all of the bay and port towns throughout Michigan and Wisconsin.

According to locals, salmon populations are way down due to changes in the food chain, but that does not mean you can’t catch them. Coho salmon are delicious, and you can catch them from any shore or pier along Lake Michigan.

We know you’re not fishing for these on Lake Michigan, but many of the towns we talked about above have small inland lakes that are full of smallmouth bass. If you’re tired of fishing the big lake, you may want to venture in a little to see what you may find.

This charter is based in Manistee Michigan and has 4.86 stars on fishingbooker. People say that Captain Lenny made their trip fun and he helped them catch more fish with his education and assistance.

This charter is based in Milwaukee Wisconsin and has 4.81 stars on fishingbooker. People that took the trip said that they had a great time, they went to all the best spots, and someone even caught a 16-pound salmon in their first hour.

This charter is based in Holland Michigan and has 4.81 stars out of 5 on fishingbooker. Reviewers say that the charter was a great time, the captains were knowledgeable, and they were great with kids.

In recent years with issues of water contamination and high mercury levels in the waters of Lake Michigan, there is a concern of whether or not it’s safe to eat any of the fish from the lake.

According to the University of Michigan, they recommend using your common sense when fishing to eat. They say you should go for bluegill, perch, walleye, bass, and crappie and stay away from bottom feeders like catfish and carp.

They also say that you can trim the fat and cook off a majority of the toxins, but at this point, children and women who are pregnant should still stay away from these fish.

As long as you are fishing for the right types in the clear less contaminated waters, you should have no problem eating most panfish and bass.

Now you should have a good understanding of where to fish Lake Michigan and what you should expect to catch when you’re there. The lake has an abundance of fishing opportunities, and it draws tourists all year looking to fish the shore and out on a boat.

If you’ve ever fished Lake Michigan before, drop us a comment and let us know where you fished and what you caught!