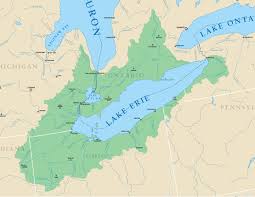 Are you planning a fishing trip to Lake Erie? The fourth largest of the Great Lakes is right along the border between Canada and the United States. To the North, you have Ontario, and to the south and west, you have Michigan, Ohio, Pennsylvania, and New York.

The lake was named Erie after the Native Americans who lived along its Southern shore. Erie is a shortened version of the Iroquoian name Erielhonan which means long tail.

Lake Erie contains the largest freshwater commercial fisheries in the world and the high population of fish in the lake is due to its mild temperatures and an ample supply of freshwater plankton. In this lake, you’ll find a broad lineup of great fishing opportunities for walleye, pickerel, smallies, perch, trout, salmon, smelt, and a list of others.

For decades leading up to the 1950s, this lake got heavily fished for commerce, and the catch of choice was Walleye. Throughout the 70s and 80s pollution in the lake rapidly declined and the amount of walleye increased but so did the fishing.

We’re giving you everything you need to know about the best places to fish Lake Erie on your trip. By the end of this article, you’ll know where to hit the water, what you can expect to catch, and how to charter a boat if you want to go out on Lake Erie.

Where to Fish Lake Erie

The four states that border Lake Erie stock over two million steelhead a year so even though the walleye population might be down due to overfishing, the opportunities are still endless along the shore of this great lake. Here are some of the best places to launch a boat or fish from the shore.

Lorain is one of the largest cities we’ve featured on these travel guides with a population of 64,097 in 2010. The city is located about 30 miles west of Cleveland, and it sits right on Lake Erie at the base of the Black River.

Lorain faces a lot of the troubles that the deindustrialized cities along the rust belt face. Population decline and urban decay are rampant in this city with the rate of poverty higher than the national average.

That said if you are looking for excellent fishing along Lake Erie than this town has a lot to offer for you. Right in the heat of summer, this is the place you want to be to catch the lower population of Walleye available in the lake.

Local experts recommend fishing shallow waters at dusk right along Lorain Harbor. They say if you think you’re too shallow, you’re not shallow enough. They claim the best depth to catch Walleye is between 5 and 15 feet of water.

Erieau is a sunkissed town and a beautiful destination for those of you looking to cross the border. The town is right on the Northwestern section of the lake within a few-hour drive of Detroit.

Erieau is known for its tourism, fishing, and outdoor recreation and it kind of has a “Cape May” feel for anyone who has been.

The town offers a lot beside Lake Erie as well with great fishing along Lake St. Clair and Mitchell’s Bay. Fishing Erie from the town provides bass, perch, pike, and monster walleye.

Local experts recommend fishing here for steelhead and setting your sights on debris and birds in the water. If you can find birds, you can find steelhead.

Believe it or not, the second largest city in New York offers the absolute best fishing along Lake Erie. Buffalo used to be occupied by the Iroquois tribe until French settlers took over after the 17th century.

During the 19th and 20th century from growing immigration, the city took on a lot of its current appearance and growth. During this time, the cities access to the lake made it a huge trade route to the Midwest which contributed to a lot of the economy in upstate New York.

Locals say you can fish Small Boat Harbor in Buffalo through the summer into early fall before it gets too cold. Look for Seneca Shoals and Meyers Reef outside of the city for great shore fishing. Smallmouth bass is plentiful along the shores of Lake Erie inside and outside of Buffalo.

The fourth largest city in Pennsylvania is our next destination to fish along the lake. Erie was named for the lake and after the Native American people who called this place home until the middle of the 17th century.

The city has a population of 97,369, and it has been slowly decreasing for years as deindustrialization continues to affect all the large cities along the lake.

Although manufacturing and other industries have decreased over time, tourism is becoming more and more popular in this lake town with over four million people visiting Erie each year to check out Presque Isle State Park.

If you plan on hitting this lake town, intend to catch plenty of Steelhead throughout the fall right outside Presque Isle Bay. Here you are only allowed to launch small boats with outboard motors which make for a better fishing experience.

A lot of local experts recommend fishing the shorelines because there are plenty of piers and shore access.

What Can You Catch on Lake Erie?

Now that you have a solid understanding of where to fish the lake, let’s talk more about what you can expect to catch and the best strategies to land the biggest fish.

We know that Lake Erie produces some sizable walleye with most being 15 inches or greater. The average walleye from the shore weighs about five pounds with seven and eight pounders common practice.

Walleye are sensitive so they will head deep down into the water during the day and come towards the surface at night. If you can find a walleye they typically travel in schools so if you find one, congratulations, you found a bunch.

In the lake, they are most commonly found on the western portion in the spring, and then they move to the eastern area when the weather gets warmer.

These fish dominate most of the lake because they get stocked in high abundance. They are fighters and prefer warm areas of the lake so expect to find them in the eastern portion of the lake around Pennsylvania and New York. Steelhead is also not as good to eat as perch or walleye.

Local experts say the best fishing for steelhead is done during the fall months because they school during this time, so it’s easier to find them right off the shorelines.

These are native to the lake, and they mature much slower than steelhead. Expect to find these at the bottom of the lake and troll slowly at about two miles per hour or less if you want to find them. Local experts say fish east of the city of Erie, and you’ll have no problem catching some lake trout.

This year there is much concern centering around the Algae bloom which is a drinking water contaminant as the result of runoff pollution. This occurs when rainwater washes manure from large fields into streams that flow into the lake.

There is little information on how this could possibly affect the fishing quality of the area but the pollution does seem to be a large concern for people living in this area.

Here are some of the highest rated fishing charters, according to Fishingbooker.com. Chartering a boat on Lake Erie is easy and fun as long as you make the right choice so be sure to choose a charter that works for you and your group.

How to Choose a Fishing Charter

If taking a boat out is on your agenda you may want to look into fishing charters on Lake Erie. This is a great way to get the full experience of fishing the lake when you’re in unfamiliar territory.

I have taken many different charters, and I can say, there are some great ones and some awful ones.

I am not a person who gets seasick but my wife and I went out on a charter in Virginia, and we were looking to save a few bucks, it had been an expensive vacation, so on and so forth.

Anyway, they didn’t have enough rods for the entire boat which was overbooked, the captain barely said two words to anybody the whole time, and alcohol was abundant with children around.

The boat was really too small to handle the number of people and the conditions of the water, so I ended up getting incredibly sick and didn’t even get to fish at all.

Moral of the story, ask plenty of questions when choosing a charter and shop around to get the best deal. Don’t sacrifice a good time to save a few pennies.

Here are a couple of things to think about before booking your charter.

What are you getting for your money?

I wish I had asked more questions when I booked my first charter because I probably wouldn’t have gotten myself into that situation.

Don’t be afraid to ask how experienced the crew is, how big the boat is, and what you get on the trip. Some charters offer activities for kids and other things besides sitting on the boat and waiting for a nibble.

What is their philosophy?

By this I mean, do they guarantee a catch? Some boats will offer a “no catch, no pay” guarantee which is nice; it shows that they’re confident in their process and willing to put their money where their mouth is. Most charters won’t offer something like this, but I’ve seen it before.

That’s all folks. By now you should have a great understanding of what to expect when you plan your trip to Lake Erie.

I highly recommend chartering a boat from one of the reputable companies listed on Fishingbooker.com. I have never chartered on Lake Erie, but I have used Fishingbooker before and will always use it.

If you’ve ever fished Lake Erie before or if you live along any of the lake towns be sure to give us some insider information and help the readers have a great experience. Thanks always for reading!

If you have any questions or comments, leave them below!